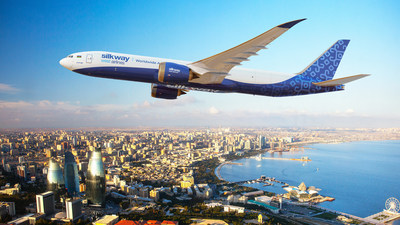 Boeing and Silk Way West Airlines have finalized an order of two 777-8 Freighters, with options for two additional airplanes. The Azerbaijani cargo carrier, which serves 40 destinations around the world, is the first customer in the Eurasia region to order the industry's newest, most capable and most fuel-efficient twin-engine freighter. Shown here, a 777-8 Freighter for Silk Way West Airlines. (Image credit: Boeing)

The Azerbaijani cargo carrier, which serves 40 destinations around the world, is the first customer in the Eurasia region to order the industry's newest, most capable and most fuel-efficient twin-engine freighter.

The order was previously listed as unidentified on Boeing's Orders & Deliveries website.

"We are pleased to announce this order with our longstanding partner Boeing and become one of the world's first customers for the newest freighter," said Zaur Akhundov, Silk Way Group president. "This year Silk Way West Airlines celebrates its 10th anniversary, and over the past decade the carrier has been operating an all-Boeing fleet. Today's agreement reflects our ongoing investment in Boeing's market-leading freighters. Our fleet renewal plans will help to further reduce our operating costs and enhance fuel efficiency as well as make air freight services in our region more sustainable."

Boeing launched the new 777-8 Freighter in January 2022 and has booked more than 50 orders for the model. The 777-8 Freighter has nearly identical payload and range capabilities as the 747-400 Freighter while providing 30% better fuel efficiency and emissions and 25% better operating costs per tonne. It is the ideal choice as operators replace aging freighters later this decade.

"With sustained demand for air cargo tied to expanding e-commerce and air freight's speed and reliability, Boeing expects the global freighter fleet to increase by 60% through 2041," said Stan Deal, president and CEO of Boeing Commercial Airplanes. "We are proud that Boeing products, including this order for the 777-8 Freighter, continue to drive Silk Way West Airlines' expansion plans and help realize the ambition of making Baku a global cargo hub."

Boeing provides more than 90% of the worldwide dedicated freighter capacity, including new production and converted aircraft.

About Silk Way West Airlines
Founded in 2012 in Baku, at the heart of the Silk Road, Silk Way West Airlines operates around 800 monthly flights across the globe via its fleet of 12 dedicated Boeing 747-8F and 747-400F aircraft based at Heydar Aliyev International Airport. On April 28, 2021, Silk Way West Airlines signed a strategic fleet expansion agreement with Boeing for the purchase of five state-of-the-art 777 Freighters. The airline's annual cargo turnover exceeds 500,000 tons, while its growing route network covers over 40 destinations across Europe, the CIS, the Middle East, Central and Eastern Asia, and the Americas. South Korea's Incheon Airport honored Silk Way West Airlines with the prestigious 'Cargo Airline of the Year 2020' award.

About Boeing
As a leading global aerospace company, Boeing develops, manufactures and services commercial airplanes, defense products and space systems for customers in more than 150 countries. As a top U.S. exporter, the company leverages the talents of a global supplier base to advance economic opportunity, sustainability and community impact. Boeing's diverse team is committed to innovating for the future and living the company's core values of safety, quality and integrity. Learn more at www.boeing.com.