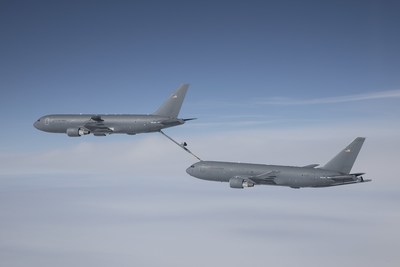 During the three-hour, forty-eight minute flight, a KC-46 successfully transferred 146,000 pounds of fuel to a second KC-46, while achieving the maximum fuel off-load rate of 1,200 gallons per minute. Both aircraft took off and landed at Boeing Field, south of Seattle.

For its Federal Aviation Administration STC testing, the KC-46 demonstrated the ability to safely/effectively receive fuel from three other tankers -- KC-46, KC-135 and KC-10 aircraft. As part of the series of tests, KC-46 tankers took on 540,600 pounds of fuel and completed 68 contacts with refueling aircraft.

When in service, the KC-46 will refuel U.S., allied and coalition military aircraft using its boom and hose and drogue systems, but also must be able to take on fuel to extend its operational range. The boom allows the tanker to transfer up to 1,200 gallons of fuel per minute, while the hose and drogue systems, located on both the plane's wing and centerline, enables the KC-46 to refuel smaller aircraft with up to 400 gallons of fuel per minute.

A combined Boeing/U.S. Air Force team is currently working to complete the overall STC testing, which encompasses the military systems that are installed on the commercial 767-2C to make it a tanker. To date, the program's test aircraft have completed 2,700 flight hours and more than 2,500 contacts during refueling flights with F-16, F/A-18, AV-8B, C-17, A-10, KC-10 and KC-46 aircraft. 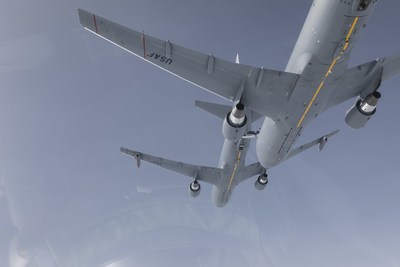