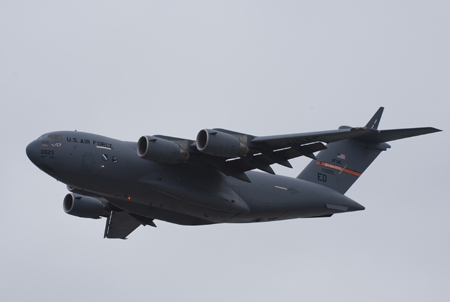 LONG BEACH, Calif., Sept. 16, 2011 -- The Boeing Company [NYSE: BA] on Sept. 15 celebrated the 20th anniversary of the first flight of the C-17 airlifter. On Sept. 15, 1991, test aircraft T-1 took off from the Boeing Long Beach site on a two-hour flight that proved the engineering and design concepts of the aircraft and marked the beginning of the program.

"The first flight of T-1 ushered in a new era in military and humanitarian airlift," said Bob Ciesla, C-17 program manager for Boeing. "Twenty years ago, when I was working in flight test for this new airlift program, I could not anticipate just how critical the C-17 would become for the U.S. Air Force and its allies. The success of the C-17 Globemaster III program extends beyond Boeing's employees and supplier partners -- who have proudly engineered and built the world's greatest airlifter for two decades -- to exceed the expectations of customers around the globe who fly the jet every day."

The C-17 has flown more than 2 million hours in its 20-year history, supporting worldwide airlift missions that transport troops and supplies to global hot zones and bring aid to those in need during humanitarian crises.

"There is no question that the C-17 has set the bar high," said Ciesla. "The program has performed on cost and on schedule for more than a decade. Now we are entering a new stage with a production-rate reduction from 15 to 10 aircraft per year, extending the life of the C-17 line to 2014 and beyond."

The C-17 aircraft has achieved a number of record-breaking milestones -- more than any other airlifter in history -- and set 33 world records during initial flight testing at Edwards Air Force Base, Calif. The C-17's records include payload to altitude and time-to-climb, as well as a record for short-takeoff-and-landing in which the C-17 took off in less than 1,400 feet, carried a payload of 44,000 pounds to altitude, and landed in less than 1,400 feet.

During the past 20 years, Boeing has delivered 235 C-17s -- 211 to the U.S. Air Force, including active duty, Guard and Reserve units, and 24 to international customers including the United Kingdom's Royal Air Force, Royal Australian Air Force, Royal Canadian Air Force, Qatar Emiri Air Force, United Arab Emirates Air Force and Air Defence, and the 12-member Strategic Airlift Capability initiative of NATO and Partnership for Peace nations. India became the newest C-17 customer in June, when India's Ministry of Defence signed an agreement with the U.S. government to acquire 10 C-17s that will be delivered in 2013-2014.